A Passion for Life!, Attitude - Stitch This!, Embrace Your Own Beauty

Age is Just a Number

Age is just a number.  That’s what I heard over and over again when I hit 50.  I loved the thought as well as the cards and the words of wisdom, but in my head, there was a different tape playing. (No, not an 8 track.) The tape playing in my head was developed over a lifetime.  You may know it.  It’s the tape that says, “It’s all downhill now. You’re on the downward spiral now.  Your highlight reel is behind you.  “You better figure this shit out as ageing gracefully may not even be an option at this point.”

Sound harsh?  Welcome to my “inside voice.”  It’s rough being me.  I wouldn’t treat my worst enemy to this mean and cruel criticism.  It’s the voice that also says, “Avoid the mirror as it’s not a pretty picture,” and, “Maybe my husband won’t notice that we aren’t fooling around much anymore.” Who has sex when they don’t feel sexy?

Then a wonderful thing happened.  For a good friend’s birthday, we all decided to go see Stevie Nicks.  Stevie was on my friends bucket list and I have been a fan of my friend and Stevie for years, so it’s a win win.

Getting ready for the concert…nothing fit and I was already tired and rundown, having been on the verge of getting sick for a couple of weeks.  A part of me wanted to avoid it all together, but that’s not what friends do, so I got my ass out the door and went. 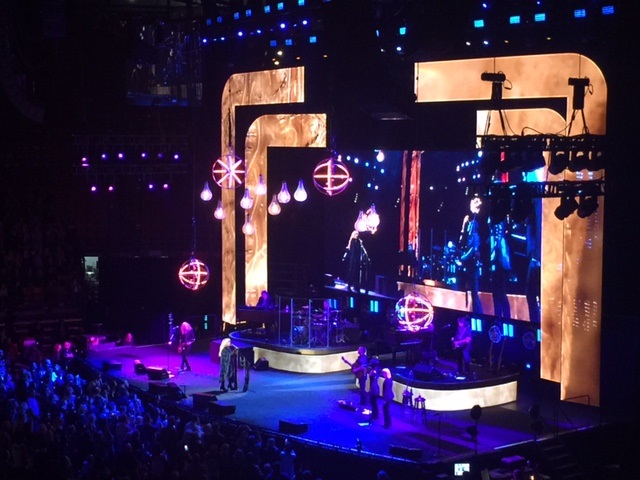 Come to find out The Pretenders were the opening act.  Which was amazing to me.  I’d never seen Chrissie Hynde.

So let me cut to the chase here:

The theatre was only 30% filled up when The Pretenders took the stage.  In fact, the lights were still on.  No big announcement, no hullabaloo. Just Chrissie and her band walking out and starting the show.  Who starts a show with the lights on with most of the crowd not seated yet? Professionals, that’s who.  A true pro who has no ego, as the work speaks for itself.

The Pretenders were incredible. Chrissie Hynde owned that stage.  Her voice sounded like it was right off a freshly printed vinyl record.  Her voice was pure, strong, edgy and self-assured.  The Woman has 65 years on this planet.  (I can’t write “old” because nothing that I saw on stage indicated a decline due to her time on this earth.)  She was strong, capable and leading that band. And the crowd, that was now packed by the way, followed wherever she wanted to go.

I looked at my friends who had nothing but sheer joy on their faces, as well as the strangers all around me who were standing, singing and being in the moment.  Nothing like music from our youth to ignite some of that passion and joy we felt back in the day. And to have it delivered by someone who gets what it means to own their story and not have any labels put on them?  It was a gift on so many levels. 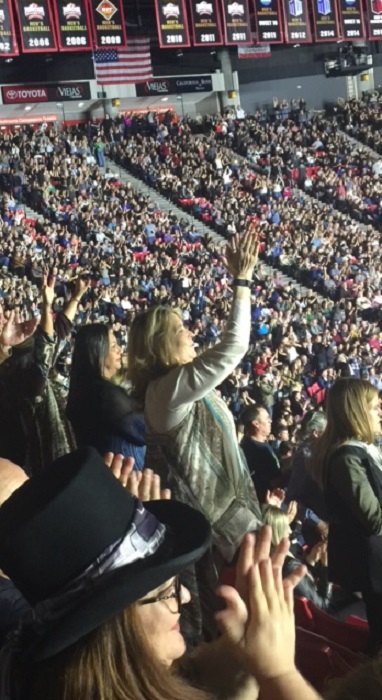 The forward momentum continued with Stevie Nicks, who presented a thoughtful and almost spiritual journey of her musical history and did not miss a beat when it came to delivering.  Stevie Nicks is 68, God love her.  Her voice was weathered and raspy with sixty-eight magnificent years to show for it.  Her voice was spot on and lifted everyone in that arena.  The music and these Women filled my heart.

They both told a different story about what it means to get older in this world.  To really suck the life out of life.  To own your story.  To be daring and brave.  To be okay with failing because it means you’re learning – and then you try again.  To never give up on your dream, your art or your beliefs – that age is truly, nothing but a number and life will rock on as long as you’re in it and you’re game enough to engage and be all you were meant to me.

I left that concert a changed woman.  I walked out in the night air, my heart lifted and my soul inspired.  It’s been over a week and I still carry these feelings with me and have taken some steps to get back to my old ass-kicking self that truly believed she could own the world and make a difference.  I am her.  I am still that girl, now a woman who has just lost her way.  These women were like beacons of light for me and undoubtedly so many others who were there. It’s all possible and still waiting, no matter what your number is!